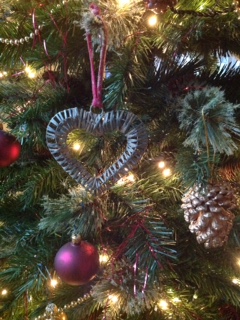 Christmas Eve we had a meal booked with my Sister and her family as it was her Birthday. We went to Fresca Italian restaurant that we like with it’s great friendly atmosphere. I had starting sneezing the night before and that morning so knew I was getting a cold. The kids had been ill with various things coughs and colds. I went to do some last minute shopping and then went see my Auntie who is in a care home as needed to get her to write a card for my sisters birthday. I took in lots of her photos as the home said they’d love to have some pictures for her bedroom. We had a good chat and then I had to get home as the meal was booked for 4.30pm.

Eventually making the restaurant for 4.45pm (late again no surprise there…) there was a problem on the table and we had to wait for one to clear. I was the nominated driver and we eventually sat down for dinner. I was fine for 1/2 hour and then started getting worse with the symptoms, freezing cold, shivery, achy, nose streaming and felt generally unwell and very, very like I had flu. We finished the meal and by this point I had two coats on a scarf and still feeling cold and I’ll was going worse. I drove the 5 minutes back home with Jeff and the children and all I wanted to do was to get home to bed.

Soon as we got in I had a hot water bottle and sat in bed watching Christmas TV. I fell asleep and when I woke I felt terrible. I asked Jeff to get the thermometer and it was 38.7… It’s been ages since I was on chemo so had forgotten some of the procedure with the chemo hotline. Jeff didn’t think I needed to go, I knew I was feeling terrible and it worried me thinking it could turn into an infection after coming on me so quick. I had some paracetamol and then rang the hotline. With the temp and the SEs everything pointed to an infection so they didn’t want to leave me. My choice was to go to Christies or Oldham hosptial – I said I would drive to Christies and they told me I couldn’t so that put paid to that! I couldn’t ring anyone as thought everyone would have had a couple of drinks so didn’t want to put someone under pressure and it was Christmas Eve for goodness sake! The children were in bed and we couldn’t get them up. So Oldham hospital it was. I was very nervous about what I’d find. Who in their right mind wants to go into A&E on Christmas Eve and early Christmas morning? I was dreading what I would find but the taxi (£27 lighter due to double time) dropped me at the front doors and I walked in. There was no one in so I ended up being seen very quickly. The nurse Claire saw me and took all my details and formalities. Changed into a gown and then Line in (couldn’t use my port due to risk of infection because it’s another hosptial than where I’m normal treated) she did really well as couldn’t get it in my arm and took the advice of it in my hand so bloods taken for analysis and cultures. Temperature was up at 38.9 and I was burning up and felt awful.

Claire the nurse was lovely and she took my BP and then did and ECG. All normal. They have a procedure with Christies for their patients that within an hour antibiotics are automatically given. Saline drip was given by IV as well to help with the temp and for fluids. The WBC came back and all was ok. So all in all it was looking more like it was a bad case of flu rather than being neutropenic and or having an infection somewhere. The Doctor came to see me and checked me over so then I waited in a side room in the dark for the other tests to come back and a plan. I must say it was thankfully quiet and the staff were excellent. We had a good talk about medical stuff and they were quick and efficient and kind and caring. Even got my builders brew right! I really hesitated going into the Royal Oldham due to previous issues but it made sense to come here. Anyway, it definitely exceeded my expectations and thankfully the Doctor came to see me said I was OK to go, they took the cannula out and closed the door and said I could get dressed. I walked out and it was quiet, no nurses or doctors there to say ‘thank you’ to again and they disappeared into the next problem. It was 4am and I called a taxi to take me home.

So while you were tucked up in bed ready for Santa to arrive there were amazing things going on in our hospitals trying to fix people as their work never stops.

Boxing Day I woke up at 7am coughing, couldn’t stop, wheezing and barking to the point Jeff was patting me on the back and couldn’t get the heaviness off my chest that was there. I felt I couldn’t breathe. I really couldn’t breathe. We had a quick conversation, me breathless and coughing and decided we needed to get the children up and to emergency dash me to A&E. I arrived again and they sent me straight through to the same room I was the previous day, Christmas Day. The Doctor said I sounded like a seal, probably an upper tract infection. It was so scary wheezing. They took the usual BP and temp which was slightly up and then he went to check details and decided to give me an adrenaline nebuliser. 15 minutes and I felt better.

Another Doctor came to see me, she was lovely, I forgot her name but she explained it meant ‘pamper’ as she was finally a girl after her mum had 3 boys. Talking to her my voice started to break again and she could tell the nebuliser hadn’t worked exactly so she prescribed steroid tablets. 6 tablets and then the Doctor decided to do blood tests again just to make sure everything was ok. She needed to get another cannula in so after one attempt back in my arm she knew my veins were too hard. Back in the hand but she wanted to go into the wrist. Freaked out I asked her to see if she could find a skin freezer. She found one and came back, quickly froze my wrist and gained access to the vein. Bloods sent off I waited in the room and slept. An hour later she returned confirming the bloods were all ok again. So I had the cannula removed and had 2 days of steroids prescribed. I was glad to be able to say thank you to the Doctor and nurse that helped me this time. Free to go Jeff picked me up and got home for lunchtime.

But thank you NHS for fixing me this time.

NHS Choir – A Bridge Over You